The first Drent Jesse ever saw was Fowler—on the cover of a 2012 issue of Versatile Hunting Dog, the official magazine for the North American Versatile Hunting Dog Association (NAVHDA). Jesse thought he was familiar with all of the hunting breeds in North America, but he was wrong. We couldn’t pronounce Drentsche Patrijshond, but we were intrigued by the breed. Jesse was busy training and hunting with his Wirehaired Pointing Griffon, Toby, so Drents slipped to the back of his mind. Five years later, Toby died unexpectedly. We were devastated. Rachelle began telling Jesse that it was time to get another bird dog, but he was reluctant. One snowy afternoon, Jesse was daydreaming about hunting dogs when he remembered the article about that Dutch dog breed. The one with too many letters in its name. What were they called again? 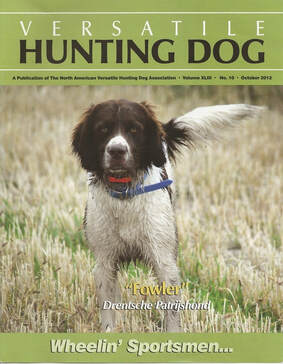 Jesse dug up the old issue of Versatile Hunting Dog and during the next few weeks he read everything he could find online about Drents (in English anyway). We did our best to familiarize ourselves with the breed and with the DPCNA. Jesse emailed Jenna Myers, not knowing at the time that she was Fowler’s owner. We were thrilled to make a deposit on one of the male puppies from the Ember x Paxson litter whelped in January 2018. The days passed like months while we waited to pick up Duck Creek’s Kobuk, or “Finn”.

Fast forward two years. Finn has earned his Canine Good Citizen, A NAVHDA Natural Ability Prize, and an AKC Tracking Dog title. During the summer of 2019, Jesse was on another plane, this time to Spokane, Washington, to pick up Duck Creek’s Painted Wings, or Oakley as we call her. Oakley is actively training for her own titles so she can keep up with Finn. Our Drents get plenty of attention from our six children. Finn and Oakley spend their days much like their Dutch ancestors and help Jesse and Rachelle with farm chores and currently hold the important position of Homestead doorbell. As much as they love our 5.5 acre homestead they love chasing quail in southern Arizona even more. We are now proud to start our own DPCNA approved kennel—High Desert Drents—a fitting name for the only Drents in the world living at an altitude of 7,000 feet.